The Ladies Dinner has become almost a classic among networking events for women. Initiated in 2013 in Berlin by the successful founder Verena Pausder, the event soon established itself in other cities and now took place for the seventh time in Hamburg. Nevertheless, the 2020 edition was also a premiere in two respects. For the first time, german.innovation had invited, thus giving the starting signal for its activities, and for the first time, the feast took place almost exclusively digitally. However, the painted duck breast and all the other delicacies created by celebrity chef Cornelia Poletto were very real, and networking also worked excellently online.

A Zoom conference that everyone was looking forward to

As is well known, one should not praise the day before the evening and a dinner not before dessert, but the Ladies Dinner of November 25, 2020, began long before nightfall with a wonderful surprise. The participants all received a bouquet of flowers from Blume2000, which brought a smile to the faces of the participants. It was not to be the last time that a messenger rang the front doorbell. But first a short explanation for all those who don’t know the Ladies Dinner. At this event, successful women – entrepreneurs, networkers and investors – from a wide variety of industries meet to exchange their experiences, network and support each other. For once men must stay out completely.

Usually such a dinner takes place in a restaurant or other cozy location, sometimes fine and sometimes rustic, but always in the closest circle of about 30 women. “Closest circle” has now become a term with an almost illegal meaning in times of Corona with its rules of distance and contact restrictions. On the other hand, zoom conferences have become so familiar by now that Claudia Schwarz and Sanja Stankovic, the founders of german.innovation, wondered if this sometimes tiring routine could not be turned into a great pleasure.

They were able to enthuse three allies with this idea: Stefanie Hagenmüller, Partner at KPMG Hamburg and a supporter of the Ladies Dinner from the outset; Doreen Hotze, Head of the Hamburg Chamber of Commerce’s startup center; and Veronika Reichboth, Head of the Startup-Unit Hamburg. They met in the late afternoon for a group photo at the Cucina Cornelia Poletto cooking school in Hamburg Eppendorf. Of course, its namesake is none other than perhaps Germany’s most famous female chef. She was immediately convinced by the idea of the format and was also responsible for the three-course menu, consisting of a truffled cauliflower soup, lacquered duck breast with risotto (the vegetarians replaced the duck with fennel) and a tiramisu with cherries.

On this evening, however, all the women were star chefs. Here again the messengers mentioned at the beginning come into play. The team delivered Poletto cooking boxes to the private addresses of the ladies, which contained all the ingredients for preparing the feast. A bottle of white wine was also there, as is right and proper by a female winemaker named Tina Pfaffmann, with whom Cornelia has been working for several years. Cooking via live stream is a technical challenge, which thanks to the Carl Group team was actually not one. With cameras from different perspectives, the participants had the perfect overview and Cornelia explained step by step what has to be considered when cooking. For example, salt should always be sprinkled from a certain height so that it is evenly distributed. Even though it was not always easy to keep an eye on the laptop and the stove at the same time to not miss out on anything, in the end all the chefs could be proud of their results.

The hunger must have been big anyway, because before the joint cooking the short introduction round was on the agenda. Whereby “short” is a rather elastic term with 30 women, who all had a lot of exciting stories to tell. Since the exchange of business cards is not possible at a digital networking event, the guests received a lookbook with a portrait of each participant, so that networking is even easier afterwards. Luckily, there was still an opportunity to do so after dinner, first in a large group and then in several breakout sessions, also a term that hardly anyone knew a good six months ago. The hosts split up and invited the ladies to the virtual rooms on various topics. Stefanie from KPMG spoke with the women about the current challenges as an entrepreneur, while Veronika from Hamburg Invest and Doreen from the Chamber of Commerce wanted to know in the session “Hey Hamburg, your women” what Hamburg needs to strengthen female founders and investors. Sanja and Claudia from german.innovation discussed internationalization and potential joint cross-functional projects. In the sessions, the women bubbled over with ideas, which will certainly be heard from a lot, because we will continue the discussions! In another digital room, “Your Story”, the women were to be given the opportunity to tell their stories, some of which will subsequently be read at Hamburg Startups and the Hamburger Abendblatt. Three times twenty minutes were available for each session and each time the clock ran down much too fast.

The digital Ladies Dinner has a future – even after Corona

In the end, as with every good event, it turned out to be later than planned. And even though every lady had been sitting alone in front of her computer (sometimes you could surmise the family in the background), a nice feeling of community was created. A real advantage: The way back to the home bed was never as short as at this Ladies Dinner. So, the big final picture with the obligatory good-bye wave showed only beaming faces. This form of dinner has a bright future, even if the catering trade will hopefully soon be able to resume normal operations.

Our goal was to create an event that is simultaneously digital and analog. We all know that in the meantime digital fatigue has set in, so it was important to us to create a network format that is more fun and where you don’t continue the daily videoconferencing marathon in the evening, but mix the advantages of the digital with the analog. A haptic lookbook (instead of business cards), beautiful flowers (as a personal gesture and for the atmosphere), cooking as an interactive element (instead of sitting in front of the screen reactively), breakout sessions (for guided knowledge transfer and exchange), working technology and a goodie bag (for the heart and because it’s Christmas soon) and great partners are simply the perfect mix.

For the next digital edition, it would be a good idea not to limit the circle of participants to one city, but to expand it nationwide or even internationally. This time already, ladies from St. Peter Ording and even Mallorca were on board. However, the dashing messengers with the cooking boxes had not quite made it to them. But of course, this does not detract from the success of this kick-off event of german.innovation. In the digital version, too, the Ladies Dinner fulfilled its mission of bringing women together so that together they can set even more standards.

At this point a shot-out to all partners and supporters of the Ladies Dinner. Without Hamburg Invest, KPMG, the Hamburg Chamber of Commerce, Cornelia Poletto, Tina Pfaffmann, Carl Group and Blume2000 this would not have been such a successful start. 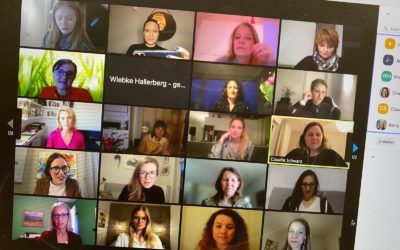 "Ladies Dinners" have been around in Germany for quite some time, with the first digital edition taking place in... 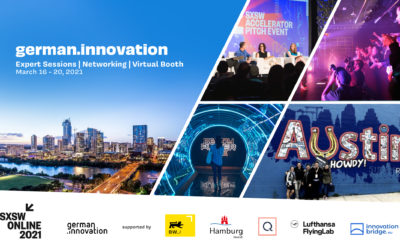 Despite  being “only” an online event this year, SXSW is once again presenting such an extremely lavish program...

Germany has been one of the largest international delegations at the Austin, TX based SXSW festival over the past...